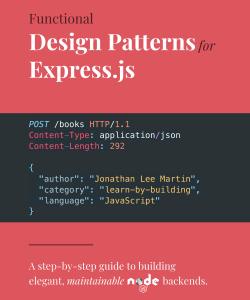 Ready to design Node.js backends that scale elegantly with new features and are a pleasure to maintain? Learn to apply functional programming patterns that transcend Express.js—these ideas are found in exceptional production codebases of all kinds. Whether you’re a seasoned back-end developer, front-end developer or recent web boot camp graduate, this step-by-step guide is for you.

This work was written and produced entirely by the author. We are proud to be distributing it.

Express is arguably the ubiquitous library for building Node backends. As of mid-2019, it is a dependency of 3.75 million codebases on Github alone. So if you hop into a Node codebase, chances are Express is part of it.

Starting from an empty directory, we’ll build a full-featured Express backend together and intentionally bump into codebase growing pains to motivate functional design patterns and Express features. With this book, you’ll:

Based on real-world consulting experiences, this book features a razor-focused set of topics and tools you’ll actually use, without introducing any simplistic “code smells” or bad habits.

So whether you’re a seasoned back-end developer, front-end developer or recent web boot camp graduate, this step-by-step guide will help you develop exceptional Node backends that will outlive Express and expand your design palate with functional programming patterns for any tech stack.

Jonathan Lee Martin is a globetrotting educator, author and international speaker with a passion for craft. He’s trained hundreds of developers—from career switchers to senior devs at NASA and HP—in immersive bootcamps. He also helps working web developers craft exceptional code through his screencast series, TL;DR. While waiting on <code>{=html}npm install</code>{=html}, he travels the world as a fine art landscape photographer.