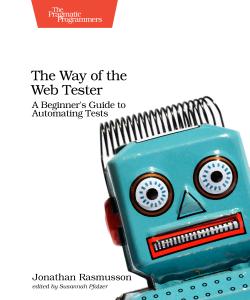 The Way of the Web Tester

A Beginner's Guide to Automating Tests

This book is for everyone who needs to test the web. As a tester, you’ll automate your tests. As a developer, you’ll build more robust solutions. And as a team, you’ll gain a vocabulary and a means to coordinate how to write and organize automated tests for the web. Follow the testing pyramid and level up your skills in user interface testing, integration testing, and unit testing. Your new skills will free you up to do other, more important things while letting the computer do the one thing it’s really good at: quickly running thousands of repetitive tasks.

This book shows you how to do three things:

If you’re a traditional software tester who has never written an automated test before, this is the perfect book for getting started. Together, we’ll go through everything you’ll need to start writing your own tests.

If you’re a developer, but haven’t thought much about testing, this book will show you how to move fast without breaking stuff. You’ll test RESTful web services and legacy systems, and see how to organize your tests.

And if you’re a team lead, this is the Rosetta Stone you’ve been looking for. This book will help you bridge that testing gap between your developers and your testers by giving your team a model to discuss web testing, and most importantly, to coordinate their efforts.

The Way of the Web Tester is packed with cartoons, graphics, best practices, war stories, plenty of humor, and hands-on tutorial exercises that will get you doing the right things, the right way.

A curiosity about how things work and a willingness to learn.

Jonathan Rasmusson is the author of <a href="https://pragprog.com/book/jtrap/the-agile-samurai">{=html}The Agile Samurai</a>{=html}. An experienced programmer, Jonathan has helped some of the world’s leading software companies find better ways of working and playing together. When not cycling to work in the throes of winter you can find him developing software and coaching teams at Spotify.