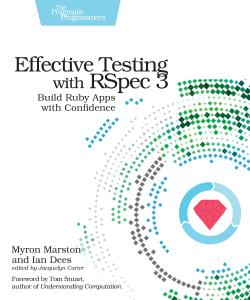 by Myron Marston and Ian Dees

“Our tests are broken again!” “Why does the suite take so long to run?” “What value are we getting from these tests anyway?” Solve your testing problems by building and maintaining quality software with RSpec—the popular BDD-flavored Ruby testing framework. This definitive guide from RSpec’s lead developer shows you how to use RSpec to drive more maintainable designs, specify and document expected behavior, and prevent regressions during refactoring. Build a project using RSpec to design, describe, and test the behavior of your code. Whether you’re new to automated tests or have been using them for years, this book will help you write more effective tests.

RSpec has been downloaded more than 100 million times and has inspired countless test frameworks in other languages. Use this influential Ruby testing framework to iteratively develop a project with the confidence that comes from well-tested code. This book guides you through creating a Ruby project with RSpec, and explores the individual components in detail.

Start by learning the basics of installing and using RSpec. Then build a real-world JSON API, using RSpec throughout the process to drive a BDD-style outside-in workflow. Apply an effective test strategy to write fast, robust tests that support evolutionary design through refactoring. The rest of the book provides the definitive guide to RSpec’s components. Use rspec-core’s metadata to slice and dice your spec suite. Dig into rspec-expectations’ matchers: compose them in flexible ways, specify expected outcomes with precision, and diagnose problems quickly with the help of good failure messages. Write fast, isolated tests with rspec-mocks’ test doubles while pushing your code toward simpler interfaces.

To follow along with the book, you’ll need Ruby 2.2+. The book will guide you through installing RSpec 3 and setting up a new project to use it.

Myron Marston, a longtime Ruby programmer, has led the development of RSpec since 2012. He works as a senior software engineer at Moz in Seattle. Myron tweets as @myronmarston.

By day, Ian Dees slings code, tests, and puns at a Portland-area test equipment manufacturer. By night, he converts espresso into programming books, including Cucumber Recipes. Ian tweets as
@undees.